European digital commons is a strategy towards a European a democratic digital environment that promotes citizens' self -determination. It is geared towards creating a digital commons with shared infrastructure meeting shared needs, and to contribute engaged digital publics and communities in Europe. It must be designed to be socially equitable and ecologically sustainable. In the digital networked age we need to:

How do we package this core narrative ?

We felt like drawing would help, and also discussed a part of speech by Harry on cultural heritage in the European Parliament which adressed similar concerns and reflected on its packaging.

Our group identified 3 key concepts, values, or major ideas that are important for the reframing and which relate to our shared values & principles: New Economy, Sovereignty and Decentralised. These concepts overlap a great deal as they are also part of a lager story, as we will see below in the description.

Overall we felt a top layer framing might be Europe, as a beacon of progressive values, human rights and potentially the bearer of a new digital enlightenment. A Europe that ensures universal access to key services like health & education, invests into the public realm and protects civil liberties such as privacy. A Europe that contrasts with the EU & China and deliberately chooses a model that does not leave everything the powerful and the market, or the state and the powerful. A Europe that embraces unity in diversity and resists a monoculture. The other top layer framing we applied is that of ‘our digital commons’ replacing the idea of 'our digital market'.

New economy: An regenerative economy as opposed to the current extractive one, one that is based on circular principles and not a linear one. An economy that is social, ecologically sustainable, balanced. It relates to the ideas presented by Raworth on economy for people & planet, but also to the de-growth movement, new labour, the commons perspective and the climate change movement. (Note- Commission term: smart inclusive growth)

Sovereignty: This relates to self-determination, choice & control of both individuals, communities and Europe as a whole. People having a say in the way their digital environment functions, hence particpatory governance of this environmemt. Yet in this context we also see this concept relating to solidarity- Solidarty in terms of not leaving everything to the individual but facing these challenges of the digital transformation as a collective. Collectively and in solidarity with each otehr we will set standards for a society that is democratic and where citizens are protected from commodification, privacy intrusion and surveillance through companies' data hunger.

Decentralised : Rather than centralised and in-transparent, both power structures as well as technological infrastructures are decentralised / distributed, allowing for a more community controlled society and embracing the European principles of unity in diversity and subsidiarity. Bottom up, local, peer to peer amd collaborative structures and economomies are enhanced providing for a democratised society. 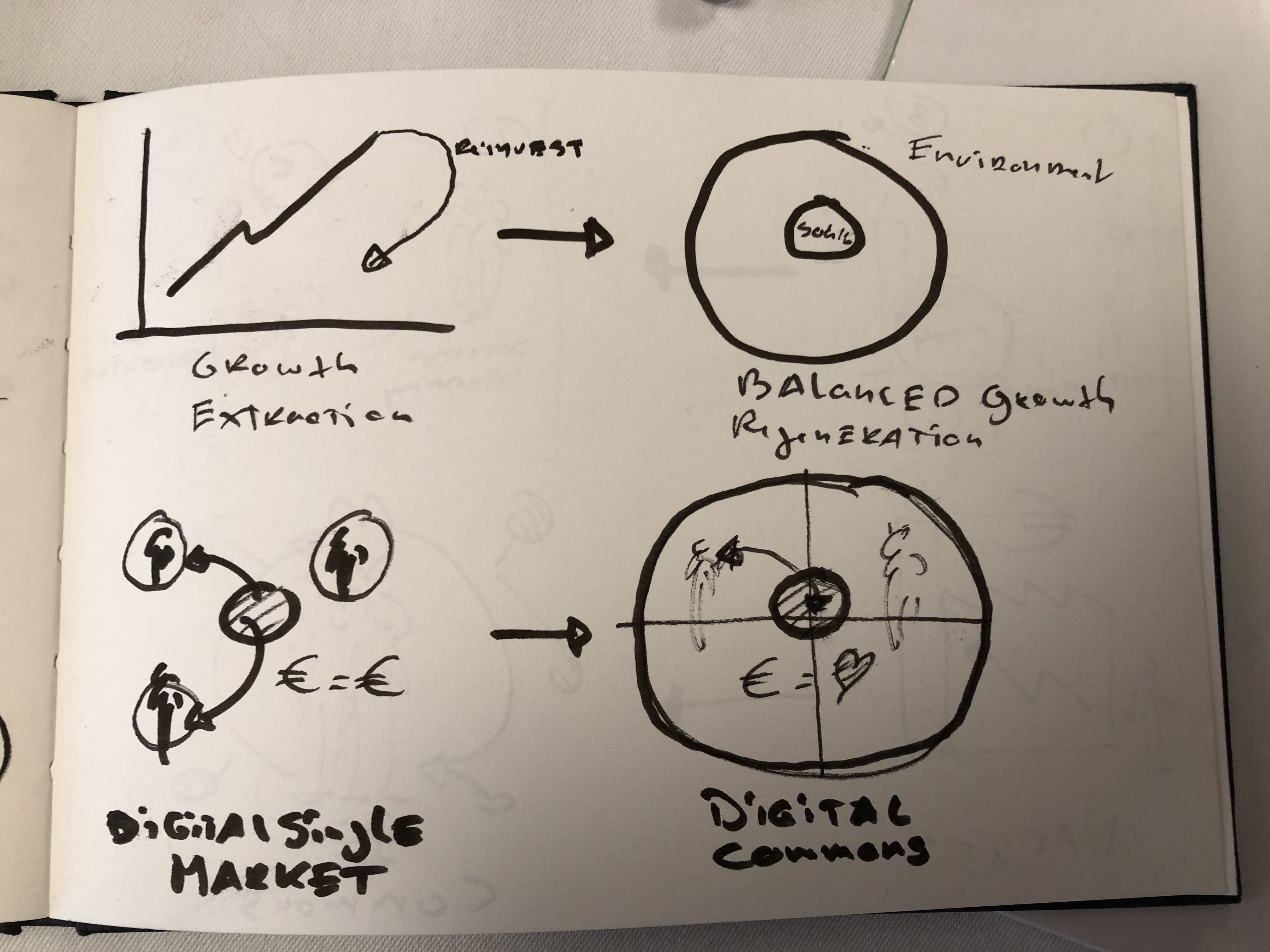 We felt it might be strategic to contrast clearly with the model we are opposing, also or especially visually. 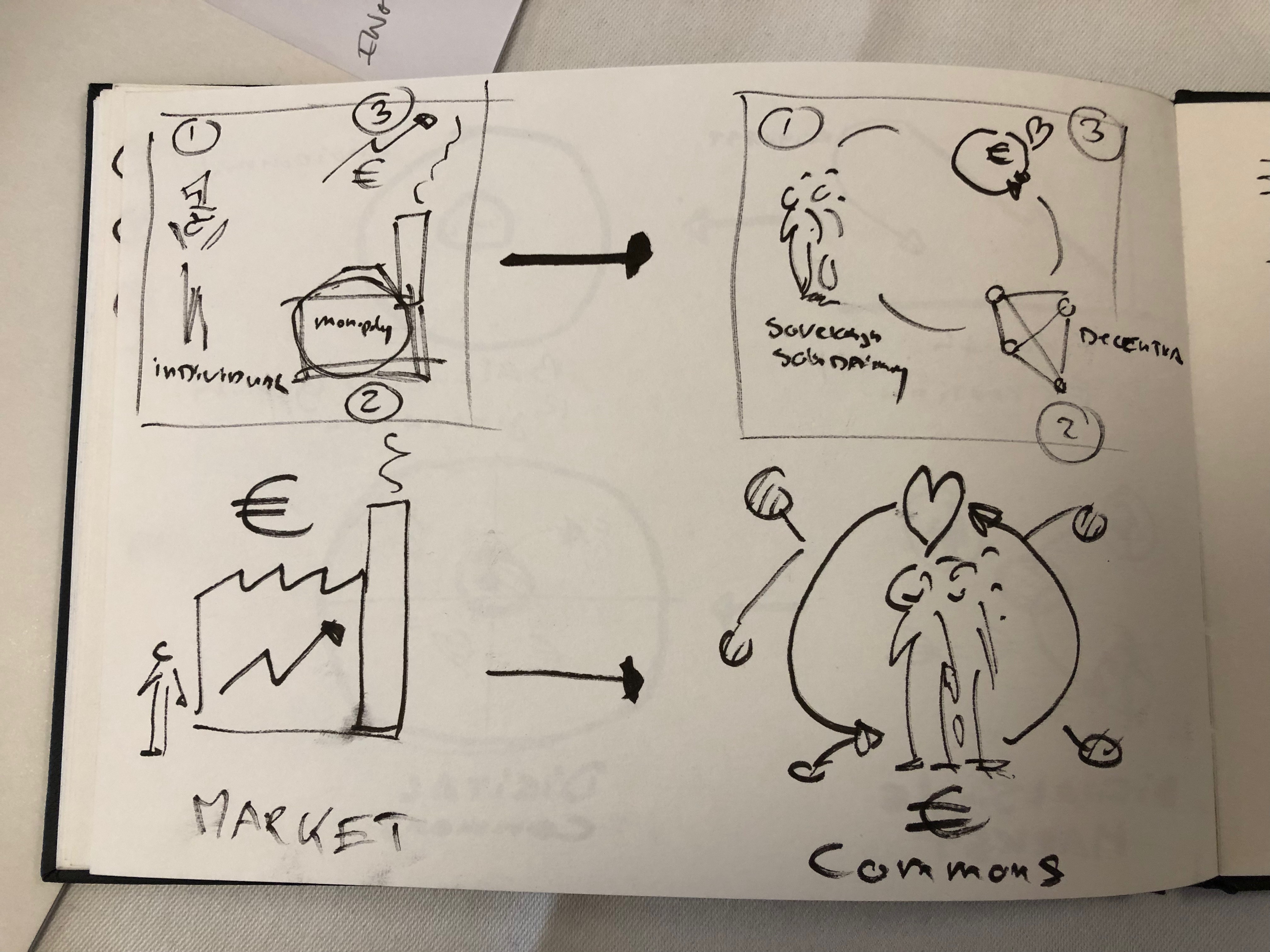 Here we contrasted market with commons. The drawings represent

If you want to give people a seat, you need a table first

Jan-Hendrik Passoth on Interoperability for Digital Public Space. This is the seventh part of our series of interviews with experts on how to get to public-civic spaces and the role of interoperability in getting there.... read more

Aik van Eemeren on Interoperability for Digital Public Space. This is the sixth part of our series of interviews with experts on how to get to public-civic spaces and the role of interoperability in getting there.... read more

Jaromil on Interoperability for Digital Public Spaces. This is the fifth part of our series of interviews with experts on how to get to public-civic spaces and the role of interoperability in getting there.... read more

natacha roussel: “Interoperable to whose benefit?”

natacha roussel on Interoperability for Digital Public Spaces. This is the fourth part of our series of interviews with experts on how to get to public-civic spaces and the role of interoperability in getting there.... read more